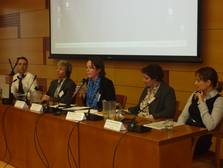 Presentation on the "Preventing and Countering Far-right Extremism and Radicalisation: European Cooperation" workshop